Penguin no. 1391: Patrick Butler for the Defence
by John Dickson Carr 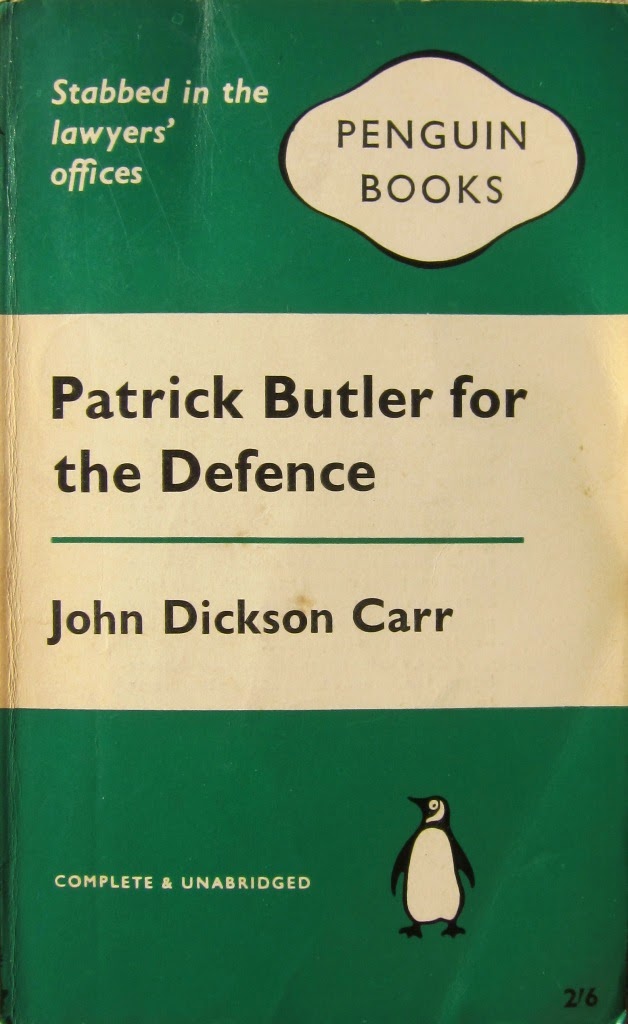 'It is not at all irrelevant,' he said, 'that Mr Hugh Prentice's hobby should have been the reading of these stories. We've all read them. And very often we have found the same wearisome device.'
'A victim, murdered and dying, is just able to speak a few words. He would, of course, speak the name of his murderer. Instead, in some of these stories, he blurts out some weird gibberish which nobody would ever say, and which has been designed by the author merely to baffle detection. Such - it appeared! - was our own problem. The difficulty seemed to be gloves. It was raining gloves. And all because, apparently, Abu of Isapahan had gripped Hugh Prentice's wrist and with his dying breath said, "Your gloves".'

I suspect I would have been quite critical of this story had I read this old Penguin at any other time; it is so lightweight that even the author couldn't resist mocking its underlying premise, as you can see in the passage quoted above. But my life has been in such a state of flux recently that lightweight is exactly what I needed, and no matter how implausible the events canvassed here, it has seemed to me at times that those in my own life have been more implausible still. So on one hand I really enjoyed this novel's untaxing quality; on the other hand I found it somewhat ludicrous.

The eponymous Patrick Butler has little to recommend him, although John Dickson Carr seems to have a soft spot for him, and Butler also seems pretty keen on himself. Among the beliefs he takes for granted is a conviction that he is never wrong, although he does have a moment of self doubt when he concedes that he may have drawn an incorrect conclusion, an admission which brings with it the galling possibility that there may be something in the suggestion of his critics that his success to date has been underpinned by the efforts of Dr. Gideon Fell. But Butler's ego is such that his moment of self doubt is fleeting, and by the end of the book he is once again secure in the belief that he is always right.

It is as though he has been given a licence to behave terribly, as he goes uncondemned for behaviour which would never be tolerated in others. He is arrogant, misogynistic and vain, and he approaches his profession as barrister as though it were a sport, admitting that he prefers guilty clients to innocent ones perhaps because the challenge is all the greater and the victory all the sweeter. And like many successful, capable and wealthy men, he seems to have women in his thrall.

But this putative ability to attract and charm a legion of women may be just as well, because his behaviour is unlikely to encourage many to hang around for long. He behaves outrageously: he whacks a female companion when she speaks in a way which displeases him, he berates and humiliates her before others a number of times, and he makes caustic comments of a kind which would surely make anyone wince. And yet the author seems to like him, offering him as a kind of larrikin - a man with evident faults but an admirably different character.

But despite his handsome features and his general attractiveness to women, Patrick Butler's greatest fan is not female. It is instead Hugh Prentice, the protagonist of this story, who clearly believes the myth of Patrick Butler's superiority no less intently than does the man himself.  Prentice wanders about almost doe-eyed through the entire story, refusing to listen to any criticism of the great man, or to admit any fault in his behaviour. It is to Butler that Prentice turns when he finds himself in difficulty, and it is Butler's appalling behaviour that he emulates when he finds himself in an awkward situation. And in the context of this story his choice is the right one - Butler does turn out to be the answer to all his problems.

A temporary shortage of staff has Prentice feeling under pressure on the afternoon that Abu of Isaphan walks into his room. It may be a passion for detective fiction which has Prentice intrigued by the man's story, delivered in a mix of French and English, telling of a near-relative who has been swindled and is now at risk of being murdered. But Prentice has a five o'clock deadline to deliver a brief to his hero Patrick Butler, and unable to both listen to the story and deliver the brief, he urges Abu to await his return. He delays for just a moment to inform his partner and friend James Vaughan of the reason for the man's continuing presence, and in doing so he is still around to hear the cry which precedes the man's death. It is clear that Abu has been murdered but the means of his death are a mystery - he was alone in the room, the window remained sealed, and no one was seen to enter or leave.

Prentice has just one thought and it is to seek out Butler, even though this means fleeing a crime scene, leaving a friend in a quandary, and failing to undertake even the most basic duties of a solicitor who finds himself confronted with an unexpected death. Much of the story continues in this vein - a difficult-to-comprehend running about from one destination to another, while indulging in adventures along the way. Prentice lacks faith in the police, and it seems clear to him that the only way he will avoid arrest is to solve the crime himself, with Butler's assistance.

And underlying the entire story seemed to be a criticism of life played too straight. Being overly career-focused, avoiding risk, and choosing as friends those who can render a service - and particularly doing all these things at the behest of a woman - seemed to be the traits which marked out the less-savoury characters of this story.